I released HT3D way back in 2006! It is a complete game that took me over a year to put together, and though it looks a bit dated by modern standards, I am proud of it - especially considering the awful tools I had to use, and my complete lack of knowledge for building a thing like that.

I took a long break from GameMaker before working on this game, and I took it up as a challenge to see how much better I could do this time around, how much closer to my vision I could make it, and to get re-acquainted with GameMaker and its new features.

It took me 4-5 months to make my HT3DR prototype, and I ended up learning a lot - and so as I share my work with you, I thought I might share some of the things I learned as well.

Before this project, I'd never used the new-ish animation curves feature in GameMaker. I had built a set of scripts many projects ago that emulated the common easing functions you find in other languages, like jQuery, through code, and I dropped them into all my projects. They were cumbersome to use, but they got the job done.

When I first started working on HT3DR, I was concerned about how well the game might run, even on my beefy computer - so I spent a lot of time making sure that as I added things to the game and tested them, the framerate wasn't dipping much.

At some point I was satisfied with performance and started just building out my demo level in earnest. I removed the FPs counter from the game as I tested the HUD, and never noticed a slowdown as I worked.

Once I had the near-final build of the level built, I started becoming curious about how things were running behind the scenes, and so I started testing performance again, and I was a little shocked to see that merely having a level full of walls (without enemies) had slowed the "real" fps from ~3,000 to ~300.

The demo map - behold all the walls!300 real fps isn't really that bad, but I wanted to cut down on waste. All my wall objects (1m, 2m, 4m, and convex/concave corners) all share the same texture, and they made up the majority of the level parts, so I wrote an object that batches them all into a single draw call, as opposed to over a hundred. The result was an increase of about 50-100 real fps, which seemed like a good gain.

I found this video, by DragoniteSpam, hugely useful in helping me figure this out:

If I work further on this project, I might eventually consolidate all the static buildings into one draw call - maybe even the same one as the walls - and just merge them all into using one giant texture. Currently, the largest textures the game uses are 1024x1024.

All of the more complicated objects in HT3DR use a form of state machine to help sort out the code. For enemies, each object has a "state" variable and a "tick" counter, and uses an alarm timed to the tick. Each time the alarm fires, it calls a custom user event whose number corresponds with the state, which is responsible for doing whatever it ought to do. It then resets itself with the tick value, which can change based on the state.

This simple setup lets me have enemy AI only evaluate a few times every second, and it keeps the code from getting super long and becoming hard to debug just based on size.

The biggest drawback to this approach is GameMaker's hard limit of 16 custom user events, but I was able to keep my most complicated object (the end-level boss) under the limit pretty easily, so it worked out alright. Your mileage my vary, of course.

Edit: One other thing I've learned since writing this post originally is that a lot of my custom user events could be replaced with object methods, and I've spent some time converting them over. It's very nice to be able to call a named function specific to an object and know that it will do just what it needs to do for that particular object.

I've been using GameMaker since around 2002, and I'm a little ashamed to admit that I haven't made much use of parent objects up to this point. I had a bad experience getting them to work right way back in GameMaker 5, and I always found ways around using them. Not this time!

Parent objects in HT3DR were incredibly useful. I don't even know how I could have made this without them. Giving all my walls a parent, all my enemies a parent, all the projectiles a parent, etc. saved me so much time, and made coding collisions, sound effects, and more a breeze.

Variable definitions, which are a bit newer to GameMaker, were equally helpful. I set all my default settings for an object type as variable definitions, and then changed them only when needed in the child objects. It made dropping a new wall object into the game, for example, almost as simple as just exporting it from Blender. Since I don't have to worry about setting up collisions, bullet reactions, etc. - it's all just there, ready for me to use from the parent object.

Don't be like me. Use object parents. And use variable definitions.

Chip away at your project

As I get older, I seem to have less and less time for my hobbies - game-making included. And so some days, I wanted to add a big new thing to HT3DR, but I just didn't have the time. I learned to accept that, and just chip away at small stuff instead, and it made this project much easier to make progress on.

Try to do something every day or so. Make it a habit to keep working and tinkering, small or large. Whether you just add a new global variable, or you try some crazy idea and it ends up being something completely useless at the end of the day, at least you learned something. And tomorrow will be better because of that.

Writing your own shaders is challenging, but rewarding

I've been using the internet since the 90's and I don't think I'm bad at searching for things - but as I learned to make my own shaders in GameMaker, I found it incredibly difficult to find good resources explaining the what and why of it all. I know resources like Shader Toy exist, but without someone stepping you through what each bit of code is actually doing, even open source shaders can be hard to glean value from.

I was about to just buy a book and spend a few weeks skimming through it when I found another great set of videos from DragoniteSpam, all centered around writing shaders: https://www.youtube.com/playlist?list=PL_hT--4HOvrdkihto8Xu7hhp1-5Gj8zsa 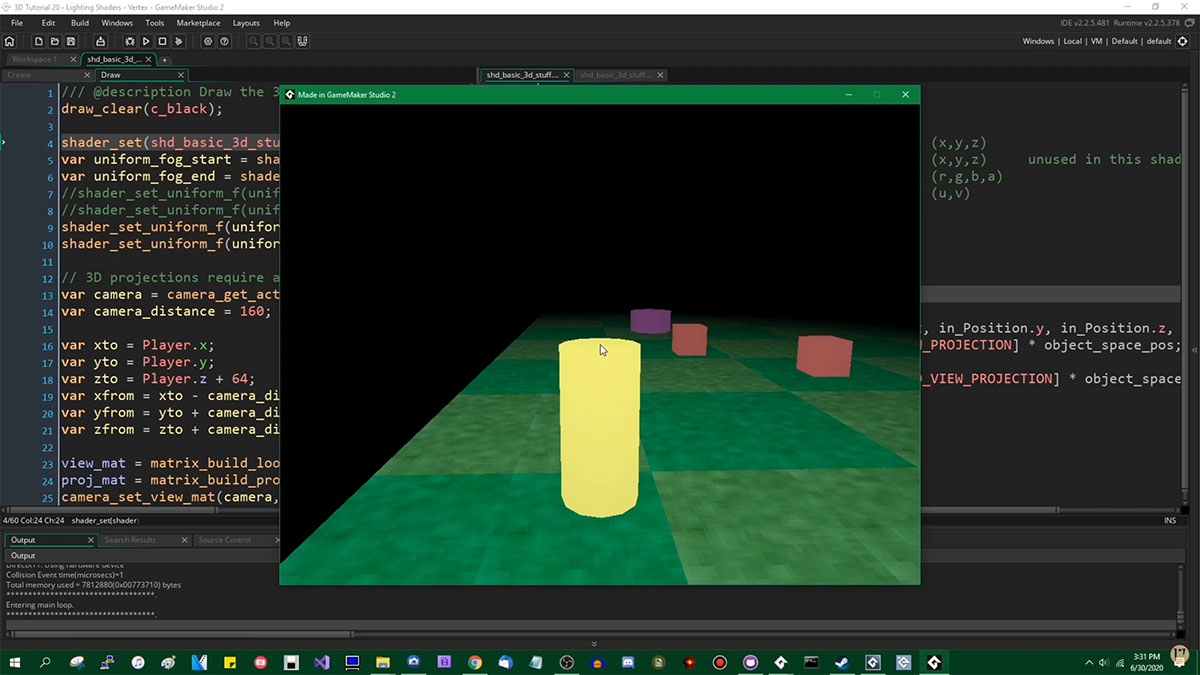 DragoniteSpam's 3D directional lighting shader tutorial
It was incredibly useful to hear him explain why he did certain things, what each step did, etc. In fact, I credit DragoniteSpam for unknowingly motivating me to get this project done. I would have never started it if I had had to contend with GameMaker's awful built-in 3D lights.

With that said, also don't re-invent the wheel. If others have done the work before you, utilize it. There's no shame in getting help.

I spent a few days working on my own bloom shader before admitting that it looked terrible. I poked around a bit for other solutions that might work and came across the Post-Processing FX addon by FoxyOfJungle/Kazan Games. 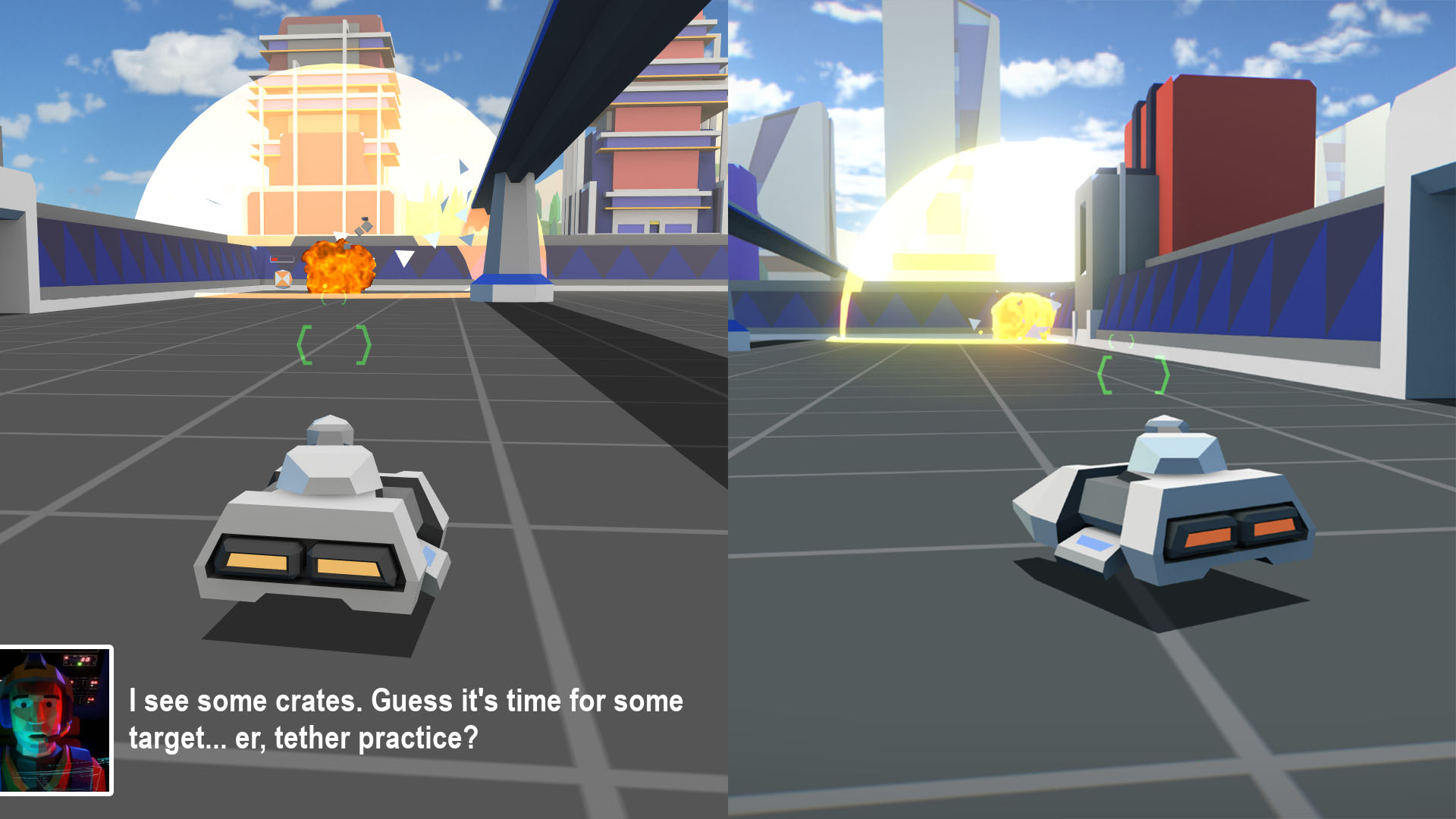 Left: without post-processing / Right: with post-processing
I bought it, added it to the project, and a half hour later my bloom effect was just what I wanted - along with a couple of other effects that I wouldn't have added otherwise, like vignette and color/exposure adjustments.

This is an incredible tool, and I can't recommend it enough. I'm glad I didn't spend more time trying to make something inferior.

Backups are important, but source control is king

Using Github desktop is something that I've been doing for many projects now, but it really takes the pressure off of making big changes to a project. 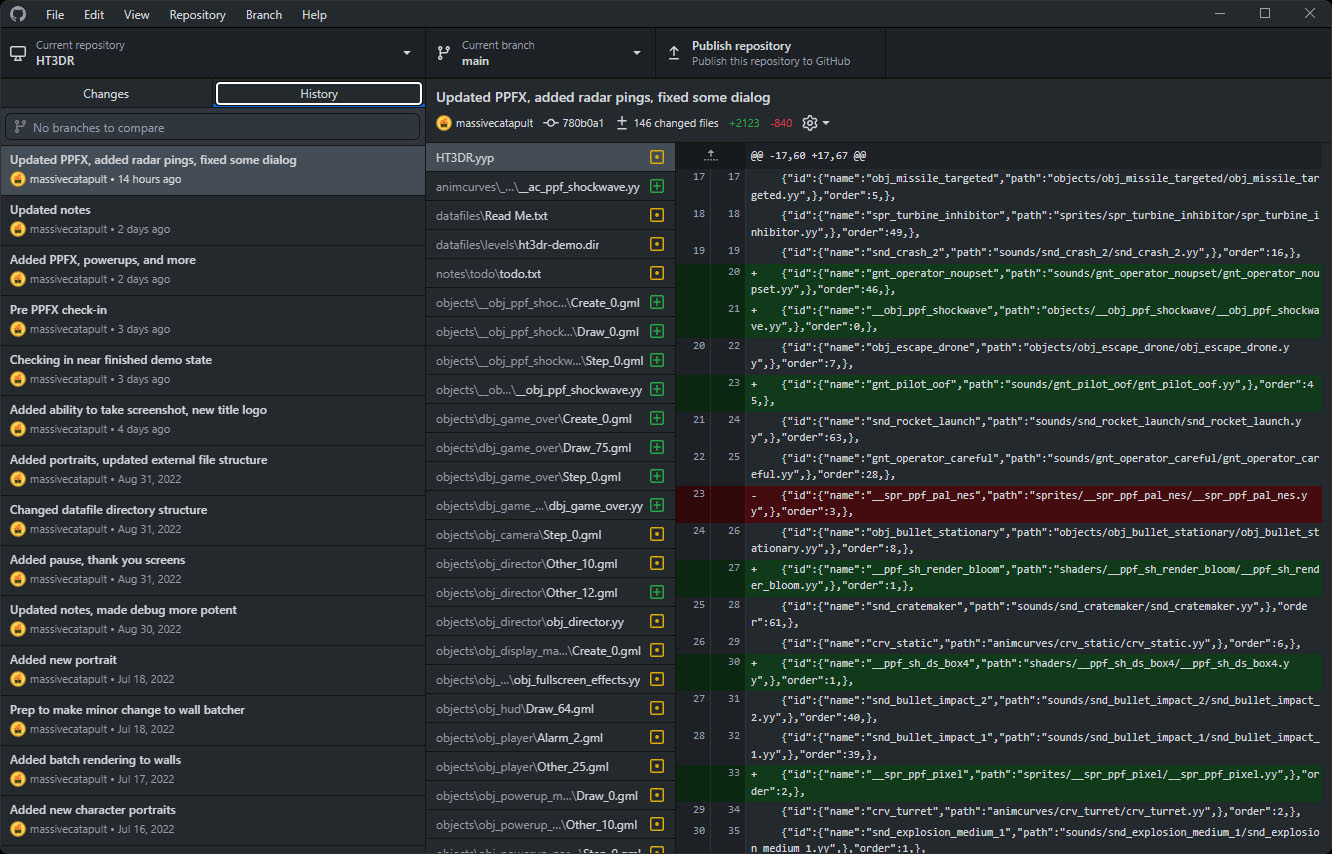 Many commits in Github Desktop
In the old days, I would have saved a new version of the project before making big changes, and I would have constantly weighed my want to do so against not wanting to store hundreds of copies of my files. With Github, I just committed my project, made the big changes, tested, and committed again if everything went fine. Easy.


This made a couple of operations, like loading my project up in VS Code and doing a find/replace across the entire project, a lot less stressful. 😅 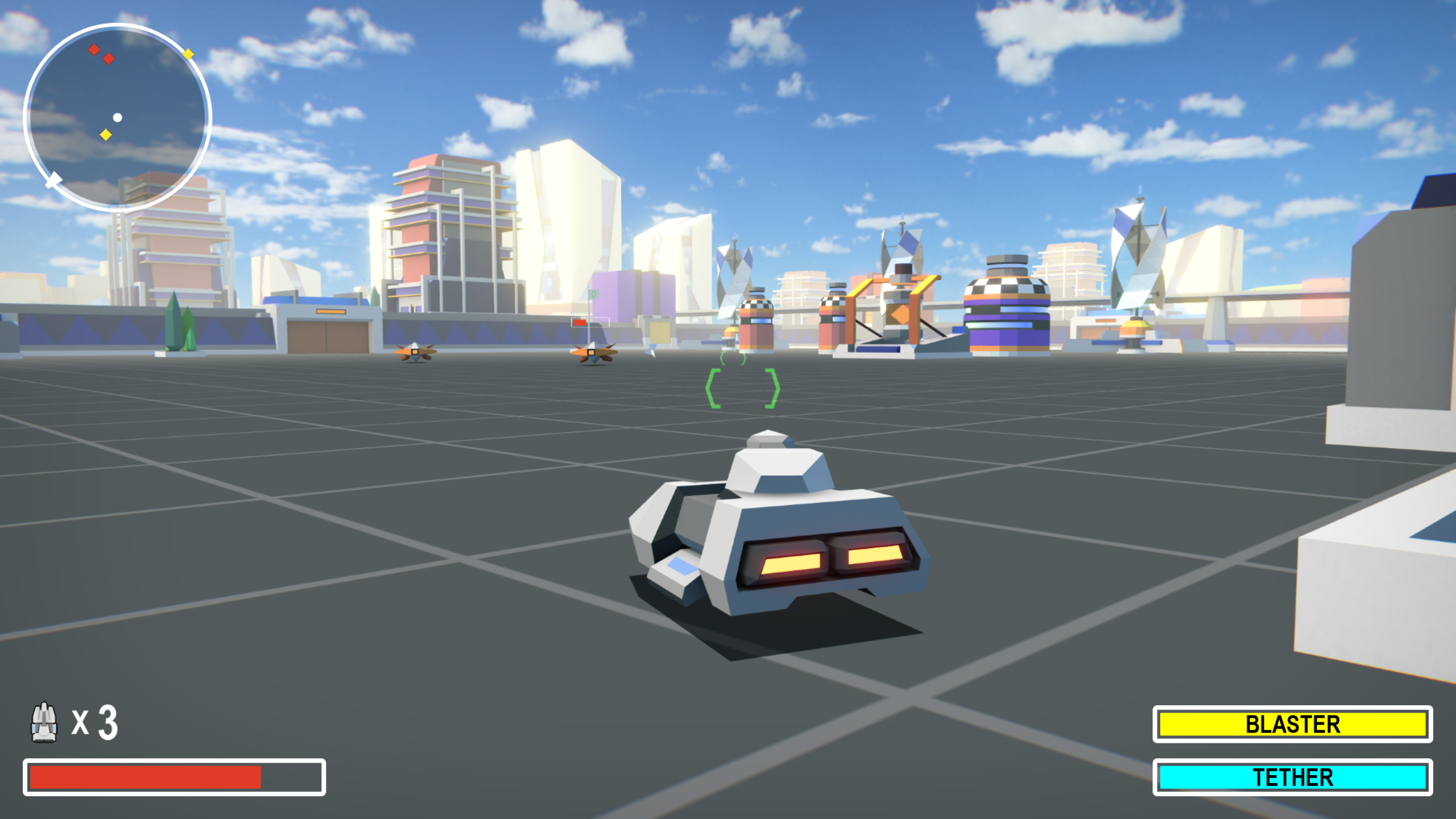 HT3DR
Find something you love and just make it

Many people are already doing this, but it doesn't hurt to restate it: if you have an idea, just try to build it.

Back in 1993, after I first played Starfox and saw the possibilities for even early 3D games, I fell in love with this stuff. I am an artist, and was learning how to draw in perspective around that time, and I drew so many basic polygonal images influenced by that game. One of those drawings was a tank, and it served as the inspiration for all of this - a thing that's been bouncing around my brain for almost 30 years.

I know an empty project is a daunting proposition, but it's so rewarding and fun to see your ideas come to life - and it has to start somewhere. Make a thing!

That's all for now!

I'm happy to answer any questions you might have about this project. Thanks for reading!

A modern remake of a classic GameMaker game, Hover Tank 3D. Bigger and better than the original in every way.

Great write up. Thanks for sharing! So good to read about your decision making process: what worked; what didn't; and how you came to choose one thing over another. Thanks again.

Thanks! I'll make sure to add more if I continue to develop the game out. Seems like I learn something new every time I touch the project, haha.